Easter is a very significant time for memorable festivals in Italy, not least the Scoppio del Carro, the Explosion of the Cart which takes place in Florence’s Piazza del Duomo every Easter Sunday. 150 revellers in medieval costume drag the flower-covered cart, before it is set alight and forms the centrepiece of an incredible fireworks display. 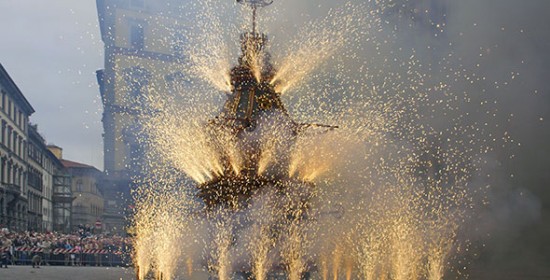 April kicks off, as it does for many of us elsewhere, with April Fool’s Day, which is called Pesce D’Aprile in Italy but which involves the same blend of fun, tomfoolery and pranks that April 1 does globally. April brings plenty of festivities, however, which do not take place anywhere except Italy.

Soon after Easter in Fermignano comes the famous frog race, the Palio della Rana, in which competitors in traditional dress from different districts of the town race their frogs, all certified race-worthy by local vets beforehand, on wheelbarrows. The bizarre spectacle is now in its 52nd year and always comes accompanied with plenty of great wine and beer. 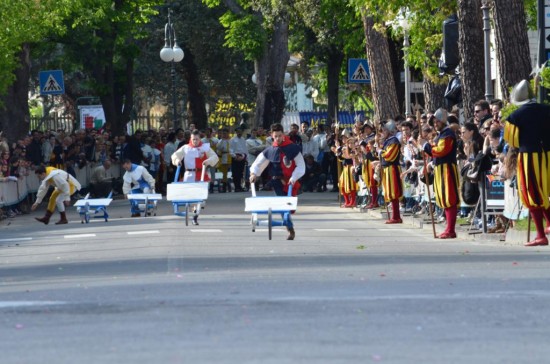 April 21 is a very special birthday,that of Rome, founded in 753BC. Although historical reconstructions and street parties take place all over town, the centre of the action is the Circus Maximus, former chariot racing track for the ancient Romans, and the site of ceremonial gladiatorial fighting during the founding festival. Fireworks are set off over the river and the capital city is hectic and buzzing.

Venice hosts a couple of really important spring festivals. The Festa della Sensa, perhaps the biggest city event, takes place forty days after Easter on Ascension Day, and celebrates the Venetians’ timeless symbiotic relationship with the sea. The Mayor of Venice signifies the start of the festival by leading a procession from church mass to the water’s edge, where a golden ring is thrown into the sea, symbolising its “marriage” with Venice. Two days of local produce, wine and fun fairs later, the festival closes with a gondola race. April 25 sees another festival dear to Venice, that of San Marco, their patron saint, when romance is in the air even more than usual and men are expected to give a rosebud to their beloved. 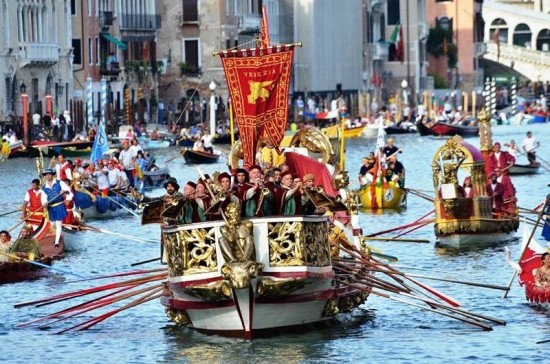 Saint George’s Day, April 23, is another important one in Italy, marked in Piemonte with the Palio dei Buoi, a procession of carnival floats dragged along by oxen. He might be revered by the English as their national saint, but in Italy, George is the patron saint of agricultural workers. The Corsa all’Anello or Race of the Ring in Narni, Umbria region is another late April festival with a difference. A celebration of Saint Juvenal, the first bishop of Narni, the highlight is three horse riders competing to capture rings during an epic jousting competition.

Food and drink is an important part of all of the festivals in Italy, but it takes centre stage at the annual Chianti Wine Festival at the end of May. Held in Montespertoli, is has all the tastings, traditional costumes and accompanying antipasti that might be expected, but also some quirkier elements such as Tuscan flag throwing and roving actors. 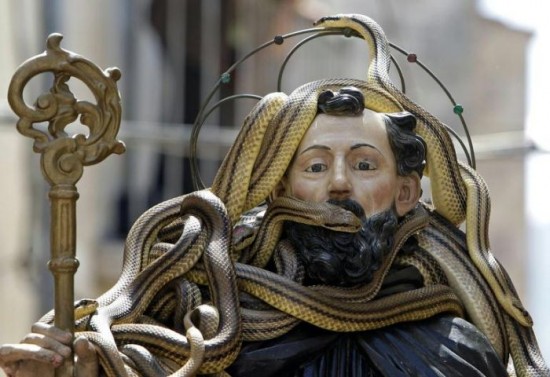 Abruzzo, however, might host the oddest festival of all, the Processionione dei Serpari, or Procession of the Snakes, on the first Thursday in May. The little village of Cocullo, near Sulmona, hosts it. A statue of Saint Dominic is covered in money, gems, and snakes. The statue is paraded through the village at noon before the live snakes, which are collected for weeks beforehand, are released back into the woods. If the snakes coil around the head of Saint Dominic it presages a healthy harvest, perhaps because legend states that Saint Dominic miraculously cleared the countryside of snakes a millennium ago. Special breads in the shape of snakes are served and the ancient ritual has been successfully performed for another year. Italy is truly a country with something for everyone in terms of unique and unexpected festivals.