Europe is a paradise for art lovers, with almost each city offering stunning examples of architecture spanning several historic periods and many world class museums and galleries showcasing art treasures from around the world.

The Mona Lisa, (aka Monna Lisa, La Gioconda in Italian, or La Joconde), The Louvre, Paris

Here are a few cities where art is a major attraction and a travel itinerary of several days can easily be built around art-related sites.

With over 250 museums and art galleries, Paris may be the art capital of Europe. This is also home to one of the world’s best-known museums, which houses what is probably the best-known painting of all time. Leonardo da Vinci’s celebrated Mona Lisa gets hordes of visitors every day, and is the Louvre’s most popular artwork, along with the marble sculpture of Venus de Milo. With 60,600 square metres of exhibition space and over 380,000 objects and 35,000 works of art, the Louvre can definitely not be seen in a day and is worth several repeated visits. 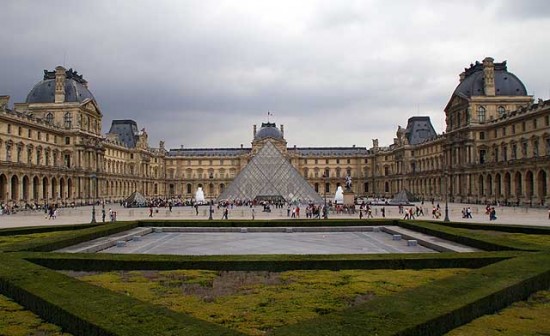 The Louvre, Paris (photo via wikipedia.org)

The other must-visit is the Musée Orsay, a massive gallery occupying a neo-classical railway station with the world’s largest collection of French Impressionist and Post-Impressionist artists, showcasing masterpieces by masters like Monet, Renoir, Degas, Gauguin, Manet, Cézanne, Seurat and Van Gogh.

Other favourites are the Picasso Museum in the Marais district, and the Rodin Museum and its fabulous sculpture garden.

London easily rivals Paris as Europe’s best city for art fans, with over 240 museums and galleries to choose from. The best part is that many of them are free. Who cares if it’s raining? There’s plenty to do indoors…

History buffs will love the British Museum, with over 8 million artworks from every continent covering human history and culture from the beginning of time to the present day. Here you can see the largest collection of Egyptian antiquities outside Egypt and the famous Rosetta Stone which allowed scientists to decipher Egyptian hieroglyphics. The department of Greece and Rome also has one of the world’s largest collection, with the Parthenon marbles from the Acropolis of Athens being another of the museum’s most famous attractions.

Tate Britain is the place to go for British art. Its renowned – and often controversial – annual Turner Prize exhibition is hosted here.

Tate Modern is the best-known gallery for British and international modern and contemporary art.

The historic city of Florence is a museum in itself. A UNESCO World Heritage Site, there are many magnificent examples of Renaissance architecture and monuments, and many museums and art galleries showcasing some of the world’s most famous artists and art works. The imposing grandeur of the Duomo, Palazzo Vecchio, Basilica of Santa Croce and lovely Ponte Vecchio are only some of the city’s many must-sees.

This is also home to the Uffizi and Palazzo Pitti two of the most famous art galleries in the world. The Uffizi houses masterpieces by Botticelli, Leonardo da Vinci, Michelangelo and Caravaggio, amongst others, while at the Palazzo Pitti you can see works by Raphael, Titian and Rubens.

The Galleria dell’ Accademia is home to Michelangelo’s famous statue of David, one of Florence’s top attractions.

The Palazzo Strozzi’s Centre for Contemporary Culture, also called ‘Strozzina’, has an excellent collection of contemporary art with many regular exhibitions, including film and video.

Berlin is one of Europe’s most exciting cities with an eclectic art scene. It even has a whole island dedicated to art, a UNESCO World Heritage Site. The ‘Museuminsel’ (Museum Island) is a complex of five museums situated on an island in the middle of the Spree River. One of these is the Alte Nationalgalerie (Old National Gallery), which has a collection of neo-classical and romantic works by artists like Caspar David Friedrich and Karl Friedrick Schinkel as well as paintings by French Impressionist artists and early Modernist works.

Just west of Potsdamer Platz is the museum district of Kulturforum, a collection of cultural institutions housed in modernist buildings. The Gemäldegalerie boasts one of the best collections of European paintings, including masterpieces by many great European masters like Dürer, Raphael, Titian, Caravaggio, Rubens, Rembrandt and Vermeer.

The Berlinische Galerie in Kreuzberg houses an impressive collection of modern art, photography and architecture.

The city of Vienna is another outdoor museum, with its fabulous gothic and baroque architecture of cathedrals, churches, palaces and public buildings.

The city’s Museumsquartier is the 8th largest cultural area in the world, with several museums, galleries and contemporary exhibition spaces located within an area of 60,000 m². Located here is the Leopold Museum, with the largest collection of modern Austrian art, featuring artworks by Austria’s best-known artists: Gustav Klimt, Egon Schiele and Oskar Kokoschka.

The Österreichische Galerie Belvedere or ‘Belvedere’ housed in the palace with the same name has a magnificent collection of medieval and baroque art as well as many masterpieces by Gustav Klimt and Egon Schiele.