The shopping guide to Lecce

Lecce is no Milan, Florence or Rome, with their haute-couture designer boutiques, trendy cocktail bars and international hotels . There are no Prada or Armani stores nor Michelin star restaurants, although there are some which arguably deserve a star or two.

I had the pleasure of sitting down with Margherita Caputo in front of a plate of pasta with fresh tomatoes and zucchini. She is an architect who lives not far from Lecce and is Property Manager of Masseria Mauriani in Carpignano Salentino.
Margherita walked me through her favourite shops in Lecce, the ones not mentioned in the tourist guides, of course!

Angelo creates artifacts and decorations in terracotta and majolica taking inspiration from the colours, sounds and perfumes of Salento. His ceramics are fun and colourful and include murals, kitchen utensils, key rings, house number tags, pottery, plates, photo albums and much more. His laboratory is definitely worth a visit.

The shop in Lecce is now closed but you can still visit the one located in Castro, Piazza del Vescovado 2.

Re di Quadri is the shop to go for original and refined artisanal artifacts; a store where you can take home traditional furnishing such as the ’pumo portafortuna”, a lucky charm ceramic knob which comes in various bright shiny colours. The Pumo or Pomo is a traditional Apulian artisanal artifact originally from the town of Grottaglie and represents a rose bud about to bloom, symbolising something coming to new life.The Pomo is traditionally offered as a good luck omen to someone starting a new business, moving into a new home, starting something new in life. 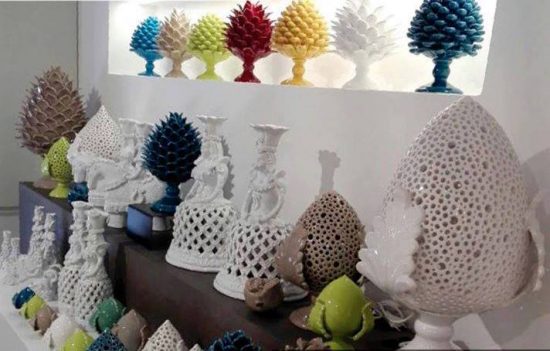 Hand-made original contemporary jewellery for both men and women. A third-generation goldsmith, Paola worked in Rome, NY, Bologna and Lecce for major companies where she could put her Italian craftsmanship at the service of international maisons. In 2004 she opened her first studio/concept store in Lecce, where you can experience goldsmiths at work.

Not far from Lecce, in Melendugno, you can visit the garden centre Punto Verde Vivai. You will not only find local plants such as a large variety of fig and other fruit trees, but also flower pots in stone as well as home-made products such as marmalades, jams, various types of preserves, legumes, dried figs, durum what pasta by Senatore Cappelli, “friselle” and other Apulian delicatessen.

An independent book store, a wine and food shop, coffee bar and All’Ombra del Barocco wine bar and restaurant located right at the heart of the old town in Lecce, steps from the Cathedral and Piazza Sant’Oronzo . Under one roof you can wander among books, have a coffee scrolling through magazines and papers, buy wine and local delicatessen or sit down for a slow-food Apulian meal. The book shop is stocked with a vast selection of books for adults and a rich dedicated section for kids. The wine shop offers a comprehensive list of Apulian and Italian wines whilst in the grocery store you can take home sweets, “taralli”, “frise”, pasta and extra virgin olive oil. There are regular events held at Liberrima, hosted both in the restaurant and in the book store, from workshops to meetings with prominent Italian authors. The best address in Lecce for a relaxing and stimulating break.

Looking for a place to stay near Lecce? Browse our Collection of luxury properties here.